The Russia–Ukraine war has thrown the commodities markets into chaos. At the beginning of March, oil hit $123 per barrel — up a staggering 68% this year.

Since many assume the health of the Saudi economy is tied almost exclusively to this black gold, it came as little surprise when Standard & Poor’s (S&P) upgraded the country’s outlook from “stable” to “positive.” But contrary to the popular narrative, oil isn’t all that matters to the Saudi economy.

As S&P stated, Saudi Arabia survived the “twin shocks” of the pandemic and the drop in oil demand and prices. As it guided OPEC through this volatile period, it stayed focused on achieving its Vision 2030 objectives despite the prevailing economic challenges.

So, what has changed? And is the Saudi economy on track to diversify away from oil?

Oil Remains Central to the Saudi Economy, but Not Its Vision

Vision 2030’s goal is to reduce Saudi dependence on oil by directing investment toward other vital economic pillars and emerging sectors. This requires fundamental shifts in how businesses operate. 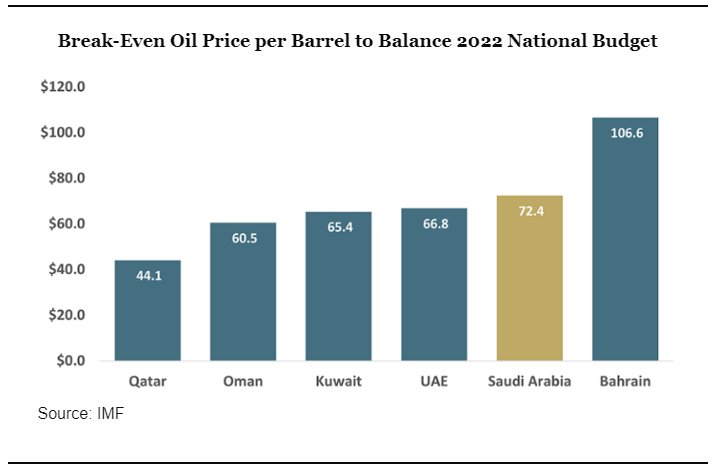 The country can’t take current oil prices for granted. That’s why it is financing and developing these other sectors and building a more resilient and sustainable economy. In the past, such expenditures were highly correlated with oil prices, but with its current plan, the government has adopted the long view and is looking beyond short-term oil price movements.

Saudi Arabia established the National Debt Management Center in late 2015 to help ensure the country’s access to global debt markets as a means of achieving the best possible cost structure to fund its budget deficit. Its efforts thus far have succeeded.

Six years on, as of year-end 2021, around 60% of the SAR 938 billion in debt is SAR-denominated, while 40% is non-SAR. The Saudi public debt to GDP ratio is expected to continue its downward trend from 32.5% in 2019 to 25.4% in 2024, according to a Ministry of Finance (MoF) report. The MoF plans to build a unified sovereign asset and liability management framework to integrate the country’s financial and non-financial assets and liabilities.

Looking ahead, the Saudi debt picture is likely to improve further. On 30 September 2021, FTSE Russell announced that the local currency Sukuk would be added to the FTSE Emerging Markets Government Bond Index (EMGBI), effective April 2022. Around a third of Saudi Arabia’s current outstanding debt will be included on the index, which will make Saudi debt more investable and attractive while improving market liquidity.

Saudi Arabia introduced its National Investment Strategy (NIS) in October 2021. A vital aspect of Vision 2030, the NIS seeks to make Saudi Arabia an investment hub through regulation and legislation, among other improvements to the investment landscape.

The strategy seems to be working. Foreign direct investment (FDI) net inflows grew by 257.2% in 2021. The first half of fiscal 2021 broke records; the second half achieved 23.7% year-over-year gains.

After all, the accelerating global momentum behind ESG measures has not gone unnoticed in Saudi Arabia. The Saudi Exchange (Tadawul) has issued ESG disclosure guidelines that set a clear, top-down tone. Given the global focus and increased ESG due diligence and regulations, the scope should widen materially. The Public Investment Fund (PIF) also unveiled its ESG strategy, which focuses on investing in renewable energy, water, and carbon management projects.

Saudi Arabia is also revolutionizing its banking sector. In the past, stability was the main priority. But the Saudi Central Bank (SAMA) “Open Banking Policy” will allow the country’s digitally literate population to safely share their banking data with third party companies, thus expanding their access to integrated financial products and opening the door to fintech development in the country.

SAMA will also launch the Open Data Platform, which will feature Saudi economic, financial, and monetary statistics and indicators. Users — business owners, researchers, entrepreneurs, and institutions — can export this data in various formats. The move should further improve the business climate and financial transparency in Saudi Arabia and increase the country’s appeal to investors.

Creating Seedbeds for SMEs and Fintech

To spur innovation, Saudi Arabia is empowering domestic small and medium enterprises (SMEs) and fintechs. The General Authority for Small and Medium Enterprises — “Monsha’at” — is building a competitive and healthy business environment to attract new entrants to the SME sector. To complement this ecosystem, it has developed various financing programs. “Kafala,” for example, is a loan guarantee initiative that helped more than 5,000 enterprises with SAR 10.2 billion ($2.7 billion) in guarantees in 2021. Vision 2030 seeks to raise the SME contribution to GDP from 20% to 35% by 2030.

During the Global Entrepreneurship Congress (GEC) held in Riyadh last March, Saudi Arabia announced agreements and investment initiatives worth SAR 51.8 billion ($13.8 billion) across various industries. These initiatives, along with the establishment of the new SME Bank, will help the industry become an engine for economic growth. Indeed, according to the Global Competitiveness Center, Saudi Arabia is ranked 12th on the Availability of Venture Capital Index, which is among the most prominent sub-indicators.

The fintech sector has lately enjoyed a concentrated push from the government. SAMA has licensed three digital banks during the past few months as well as three new fintech companies, issuing the first granted debt-based crowdfunding license and payment license. The country now boasts 17 fintech payment companies. Indeed, Saudi Arabia was recently ranked second in digital competitiveness among the G20 countries in 2021.

The Saudi sovereign wealth fund provides strategic support to the economy, and with a diversified investment portfolio of more than $500 billion in assets, it serves as a national safety net.

By 2025, the PIF hopes to expand its asset base to $1.1 trillion. Earlier this year, demonstrating its economic resilience and credit-worthiness, the PIF received its first international credit ratings, earning an A1 issuer rating from Moody’s and a long-term issuer rating of A from Fitch.

The PIF is also the primary force keeping Saudi Arabia’s “giga-projects” on track and partners with local businesses, establishing ventures, and founding enterprises to upgrade the standards of business conduct.

Oil may still dominate the Saudi commodities sector, but exploration for other natural resources is ongoing. Forty-eight minerals have been found so far, including such important energy transition metals as copper and zinc.

Saudi Arabia recently emphasized just how central mining investment is to its future. “[Mining is] becoming more and more essential for the advancement of manufacturing [and] energy” industries, according to Saudi industry and mineral resources minister Bandar Alkhorayef. And with an estimated $1.3 trillion in untapped minerals in Saudi Arabia, the goal is to scale the sector’s contributions to GDP from $17 billion in 2021 to $64 billion by 2030.

Last January, Saudi Arabia hosted the debut Future Minerals Forum in Riyadh as part of its effort to become a regional leader in the mining sector.

Amid its multifaceted campaign to diversify its economy, Saudi Arabia is at last earning recognition for its efforts. As the S&P report stated:

“The positive outlook reflects our expectation of improving GDP growth and fiscal dynamics over the medium term, tied to the country’s emergence from the Covid-19 pandemic, improved oil sector prospects, and the government’s reform programs.”

Moody’s upgraded the country’s outlook from “negative” to “stable” in November 2021. More such upgrades are likely on the way. But more important than the improved ratings themselves are the reasons behind them, specifically the country’s fiscal reforms.

As the report stated, Moody’s view came down to the “government’s improving track record of fiscal policy effectiveness, evidenced by policy responses in periods of both low and high oil prices, that consistently demonstrate a commitment to fiscal consolidation and longer-term fiscal sustainability.”

While the recent spike in oil prices may be good news for Saudi Arabia’s balance sheet, the country has demonstrated through its commitment to the Vision 2030 framework that its economic future will not be defined by the petroleum sector.