The International Monetary Fund (IMF) published their “World Economic Outlook” report in July 2022. The report forecasted a negative and uncertain outlook for the year and indicated that the organization believed that the risks they had highlighted earlier had begun to materialize. The world’s three biggest economies – The United States of America, China, and Europe, are predicted to face significant deceleration in the months to come.

In the earlier report published in April, the IMF lowered their estimate for growth in the world economy in 2022 to 3.6%. In this latest report, they further cut the forecasted growth to 3.2%. This marked a significant decline from 2021 when the global economy grew by 6.1%. The IMF director of research had stated that the world might be edging towards a global recession, only two years after the last one.

The IMF listed three major challenges facing the world’s economies as the cause for their concern. The first was the high inflation plaguing most of the western economies. Another was the Russia-Ukraine conflict that began in February and has caused substantial distress to the commodity markets. The prices for most agricultural and energy commodities rose remarkably due to the conflict as concerns increased over the supply of these products. The last reason was the COVID pandemic, which wreaked havoc on most economies. Not all countries have recovered completely from the downturn caused during the pandemic. The IMF report indicated that the weakening in the Chinese economy was worse than expected, as outbreaks and lockdowns continued.

These challenges, along with the measures employed to combat them, are forecast to drive growth in the U.S., China and Europe to 2.3%, 3.3% and 2.6%, respectively in 2022. The U.S. economy has already met the standard definition of a recession, with its GDP contracting for two quarters in a row. Additionally, as per the IMF report, the global economic growth for 2023 was estimated to be even lower – 2.9% on the back of these challenges. This value is marginally higher than the 2.5% growth level threshold, which usually indicates a global recession as per the IMF.

It is also important to note that while the IMF cut the forecasted growth globally and expressed concerns about a looming recession, it did state that some countries like Saudi Arabia and India are still expected to perform strongly in the near future. The IMF projected a 7.6% growth in the Kingdom’s economy this year on the back of a strong demand for crude oil in a world recovering from the pandemic. The organization also expects the Kingdom’s non-oil sector to grow at 4.2% and inflation to be contained at 2.8% this year.

However, economic conditions globally have an impact locally in one way or another. Some of the effects have already been reflected in the volatile commodity markets and rising interest rates. In order to counter the surging inflation, the Federal Reserve has already raised its rate from 0.25% at the start of 2022 to 2.50% by the end of July. This has led to most Central Banks in the Gulf Cooperation Council region raising their benchmark rates to maintain price stability. The higher rates can potentially dissuade businesses from securing new borrowings, and from entering into hedges against the current debt. The current conditions have created a strong rationale for firms to establish measures and enhance those already in place to maintain stability in their operations and governance during these periods of stress and uncertainty.

The current conditions have created a strong rationale for firms to establish measures and enhance those already in place to ensure that they maintain stability in their operations and governance during these periods of stress and uncertainty.

The Federal Reserve, in an attempt to tame the 40-year high inflation, began a series of rate hikes in March 2022. The Fed’s last and biggest hike, 75 basis points, came following their July meeting. The Chairman of the Federal Reserve, Jerome Powell, in his address in August, stated that he is prepared to raise rates higher and keep them high until inflation falls back to the Fed’s 2% target. He noted that the tightening in monetary policy is likely to lead to slower economic growth and an increase in unemployment. Markets predict another 75 basis-point hike following the Fed’s September meeting, with some economists mentioning that rates would need to be kept at 4% or more for the Fed’s aim of reducing inflation to be achieved. 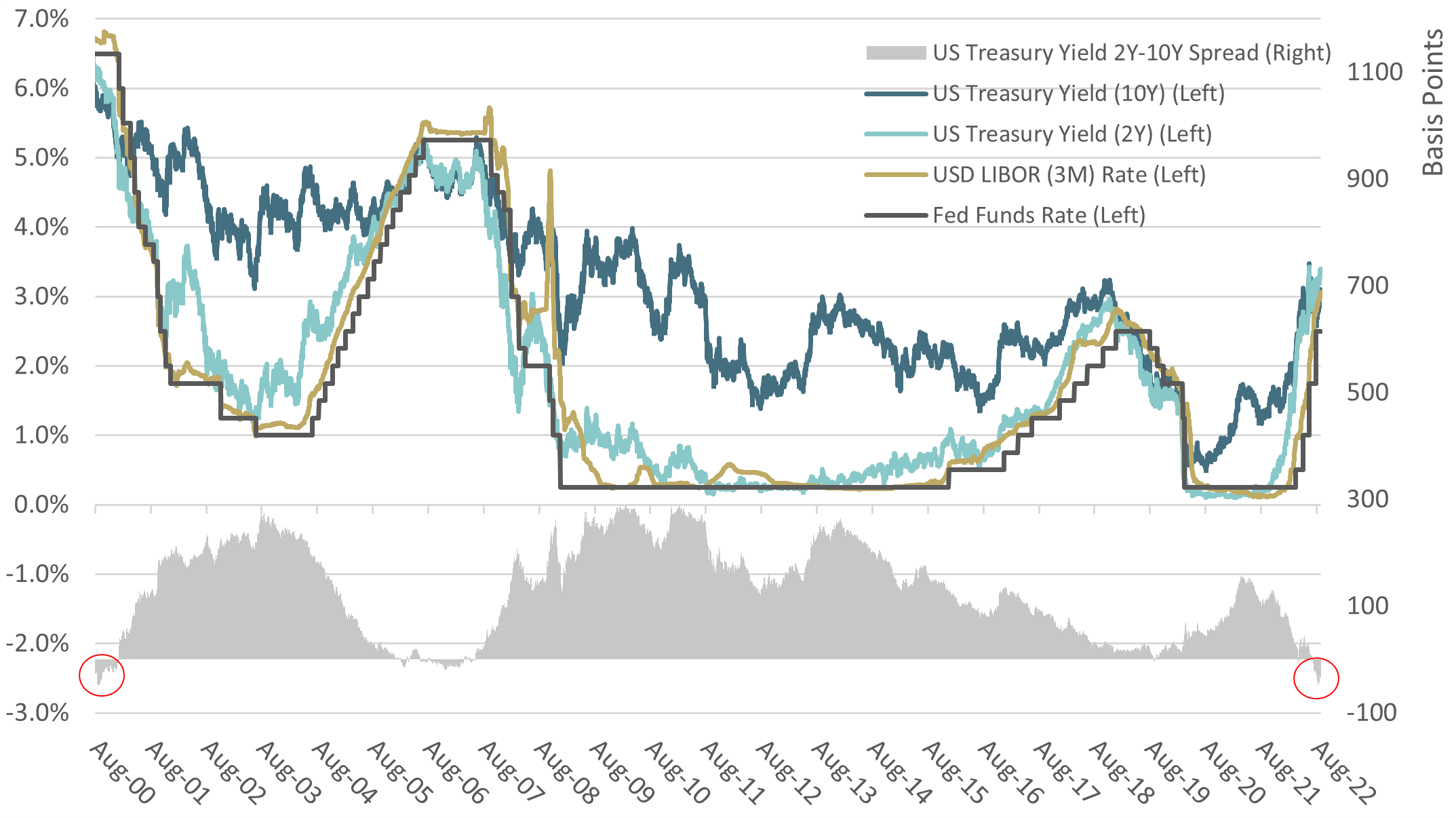 The chart above plots the Fed funds rate, and correspondingly the USD LIBOR 3M rate, and the 2Y and 10Y U.S. treasury yields since the year 2000. At the bottom, we observe the evolution of the 2/10 treasury spread. While the 2Y treasury yields usually move in a close proximity to the Fed funds rate, the spread contracts as the Fed Funds rate increases (a tightening in monetary policy employed by the Fed), and vice versa.

In addition to rising much higher than at the start of the year, interest rates currently demonstrate an interesting behavior. Since March, most yield curves have been inverted, with rates for shorter tenor rising higher than those for longer tenor. An inverted yield curve is usually associated with an economic slowdown. While this dynamic has existed for a major part of the year, the inversion has deepened recently. In the early part of August, the 2Y yield on the U.S. treasury increased over the 10Y yield by close to 50 basis points. Levels such as this have not been observed since the year 2000, when the growth in the U.S. economy slowed significantly. This period is usually referred to as the “Dot-Com bubble”.

The current Federal Reserve’s strategy to increase interest rates and employ quantitative tightening to reduce the number of holdings of government bonds from its balance sheet is in sync with the roadmap laid by the IMF in their “World Economic Outlook” report. As per the IMF, while this may bring some economic costs in the near term, it is necessary for macroeconomic stability in the longer term.

Factors such as a positive employment rate and steady inflation point to stability in the macroeconomic environment and monetary policies. In contrast, high inflation rates indicate an imbalance in the fiscal strategy, which can lead to broader issues for all participants. As noted earlier, the IMF projections and the inverted yield curve point to an economic slowdown in the near term. These events occasionally occur in a dynamic and interconnected global economy, and while they can be hard to predict at times, they pose a risk and, thus, are deemed necessary that all firms employ measures to guard themselves against their occurrence. The risk of the development of such events is referred to as economic risk.

Economic risk is the possibility of occurrence of events or conditions in the whole economy that can affect the financial prospects of a company. It impacts the profitability of and trade between all participants in the economy.

Economic risk is the possibility of the occurrence of events or conditions in the whole economy that can affect the financial prospects of a company. It is also referred to as systematic risk since its impact is not limited to an individual company or industry. Economic risk impacts the profitability of trade between all participants in the economy. In an economic slowdown, the cost of funding increases, and most financial institutions will either minimize offerings or further increase the credit charges for counterparties. It can cause significant exchange risk volatility and may bring about changes in fiscal policies or regulations. These events usually have more than one source, which can include periods of recession, geopolitical circumstances, commodities supply-chain disruptions and rising prices, and many more.

It is important to note that while this risk cannot be negated entirely, it can be mitigated. Employing measures to manage economic risk may allow companies to survive or even thrive during periods of slowdown. The approach taken would generally be similar to one adopted to manage market risk and would include the following steps:

A recommended course of action beings with establishing a regulatory framework within the firm as early as possible and identifying the Key Performance indicators (KPI) that it believes must be protected. The presence of economic risk necessitates that the firm assesses and measures the impact on these KPIs not only from interest rates or foreign exchange fluctuations, but also from revenues that may be impacted by an economic downturn. Protocols and policies that are put in place, for example, to guide the hedging process or to ensure that the inventory is maintained efficiently, can prove beneficial, especially in periods which are stressed. Additional areas for focus can be optimizing cash flow forecasting and investing in new hardware and technologies to ensure that business can continue under unfavorable conditions.

The current economic environment displays the presence of high-impact economic risks. Within a relatively short period of time, the world has faced successive unpredictable events which have caused significant financial shocks in the global markets. These events show that the challenges companies face come from a variety of risk factors. Firms have been fueled to reassess and enhance their risk framework to ensure that they thrive in an environment of heightened uncertainty. While economists and market behavior indicate the possibility of an economic slowdown, firms must employ measures to ensure that they are not at the mercy of such events and can navigate periods of volatility with a clear heading. 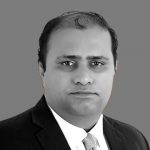